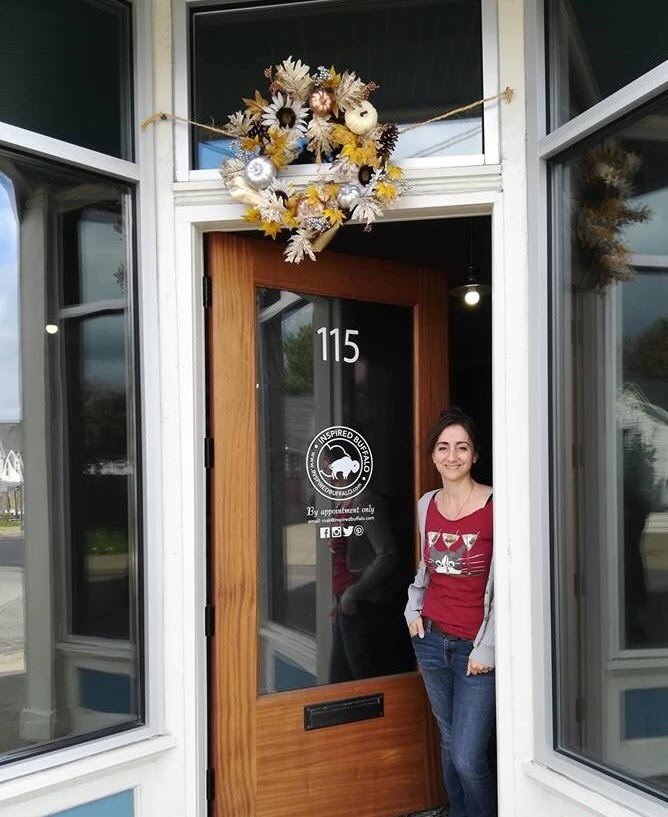 Marinette standing in the doorway of her Inspired Buffalo LLC printshop. She lives upstairs with her family. Her mother also resides here.

Since I was a teenager, I knew I wanted a career but I also knew I wanted to stay home with my children. I honestly didn’t know how that would look back then. The value of an education was instilled in me at a very early age. Being raised by immigrant parents, it was always assumed that I would do well in school and go to college. Sky was the limit in this land of opportunity called the USA. I was a straight-A student and I’m sure that by the time I graduated from UB with a Communication Design degree, they were elated that their daughter was living the American Dream.

Wanting a family and staying home with my children while earning an income never left my sight. I heard that Graphic Designers could stay home and work–if they had clients. Ahhh, but how does a quiet/shy person get clients??? I truly didn’t know. I’d get all tongue-tied in networking events–lol, I still do–and the internet was just starting to become a regular part of the business world. Oh, and social media? What was that? Facebook and Instagram didn’t even exist in normal everyday conversations for at least 5 years after my first was born.

So, what happened? Well, here’s some of the highlights: I was recently engaged to Tim and realized that my dream of having a family while working from home could actually come true so it was time to get things in order. That year I got my DBA, MAK Design — MAK are my initials and since we both shared the same letter for our last names and knowing it would stay the same after marriage, I decided to go with it in my business name. It was kind of a play on the word MAC which is also known as Apple computers. Yes, I’m an Apple snob. I’ve only ever designed on their brand of computers.

Eventually, I landed a job as an art director at one of the largest ad agencies in WNY. Time went by and we were expecting our first child. As the idea of leaving my place of employment was becoming more of a reality to me, I 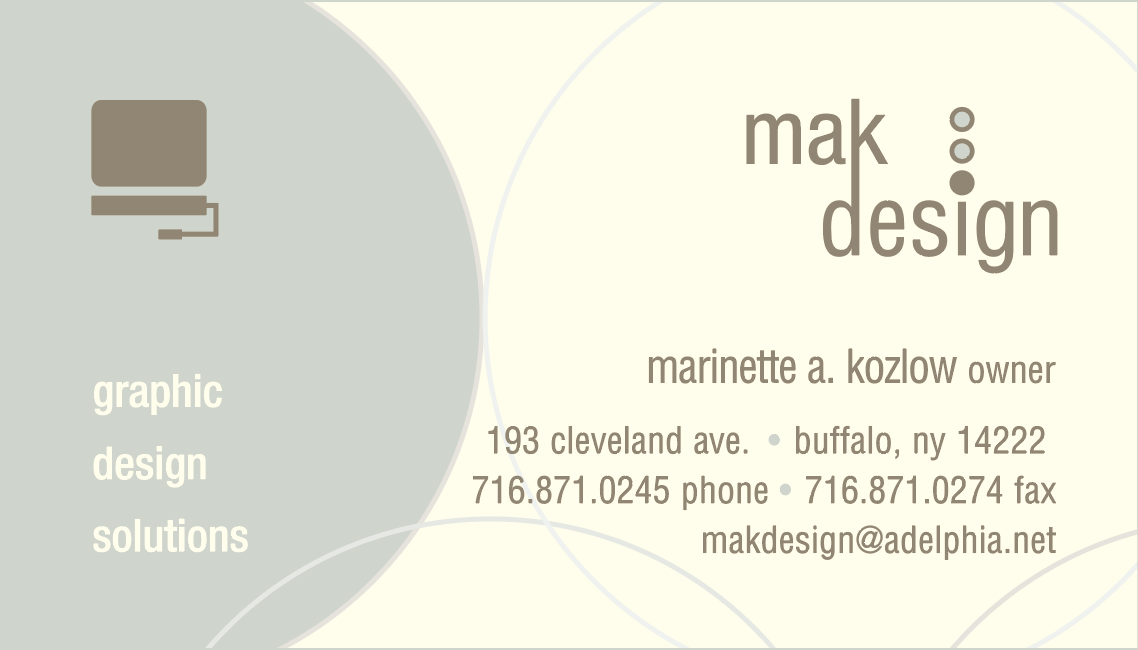 truly wondered if I could go through with it. I was starting to second guess my plans. Then, on a beautiful September WNY morning, I was sitting at my desk when out of nowhere 9-11 started to unfold. It was complete horror watching the buildings engulfed in flames and then collapse, one by one. Everyone had this sense of hopelessness in their eyes, it was such a scary time for our country. Instantly, work slowed down to a crawl and remained that way for months. Knowing that my job could be eliminated any day, it was the last push I needed. If I had any doubts about going out on my own, it was definitely time to step in faith and follow my dreams. Over the next couple of months, I purchased my new Apple computer along with everything else I needed to design independently at home. I gave my notice to HR that I would work until the baby was born–I think

I may have had one seasonal client thanks to word of mouth but that was it. WOW, that was such a leap for me and for us! Even though we were somewhat prepared, I brought in nearly as much as Tim did. It was going to hugely impact our finances.

Shortly after I announced that I wouldn’t be returning to work after having the baby, a sales rep from my agency approached me to see if I could help him with design work because he was getting down-sized–he was able to take his clients with him. I, of course, said yes!  At 8 months pregnant and while working my 9-5, I started freelancing. It’s incredible how it all fell into place. I was so excited, MAK Design was a real freelance business and my first child was soon to arrive.

Just last month, I celebrated my oldest’s 19th birthday, unbelievable! Seriously, where did the time go?? I left the 9-5 life just to raise my little one and now he’s in college! Though, I was all set up with my business and had a new family, it was FAR from easy. Now I had to actually juggle it all.  When we brought him home, he cried for 5 or 6 weeks straight. I was completely frazzled between the lack of sleep and having an inconsolable baby, I cried right along with him wondering what on earth I did to myself! 😳 Neither Tim, or I knew what to do. Thank God for my mother who brought us meals and had the magic touch. She is a true baby whisperer and gave us some respite during those rough days.

Pictured on her first Mother’s Day, Marinette was all aglow.

All at the same time, I had projects that needed to get done. Thankfully, my dear friend Rebecca Cornell, my old classmate from UB, came in and helped me complete them. She tried to shed light on what a blessing my situation was because she said there are many who wish they could hear the cry of their own baby. Her perspective was so right-on. I had so much to be grateful for. This was just a hurdle and we’d get through it. One day my little one just stopped crying–no explanation, no reason, he just stopped and was all smiley and content. In an instant, that boy stole my heart.💞 Look at the picture of my first Mother’s Day, I was all aglow!

Time marched on and we had 2 more pregnancies, 2 more boys to add to the mix and my heart was full. Yes, I would have gladly had more but needed to give my husband, my sister, Rita, and other family members a break as they were always there pitching in, lol! We eventually homeschooled them all—crazy I know but what can I say, I truly loved being with my kids! They were on a great schedule where they slept early and I worked in the evenings. It was perfect for homeschooling activities during the day. It really did work out just fine.

In 2009 when the housing, banking, and car industry took huge hits, it was a ripple effect for everyone. Many people lost all of their retirement money, businesses closed doors, and my freelance business was very quiet. Gratefully, I didn’t need the income to live on, I did find that it was a healthy outlet for me. I loved designing and helping people. I also enjoyed contributing financially to my family. We went on vacations, remodeled outdated rooms in our home, and made any necessary car repairs with the money. It all came to a halt and I became very restless. 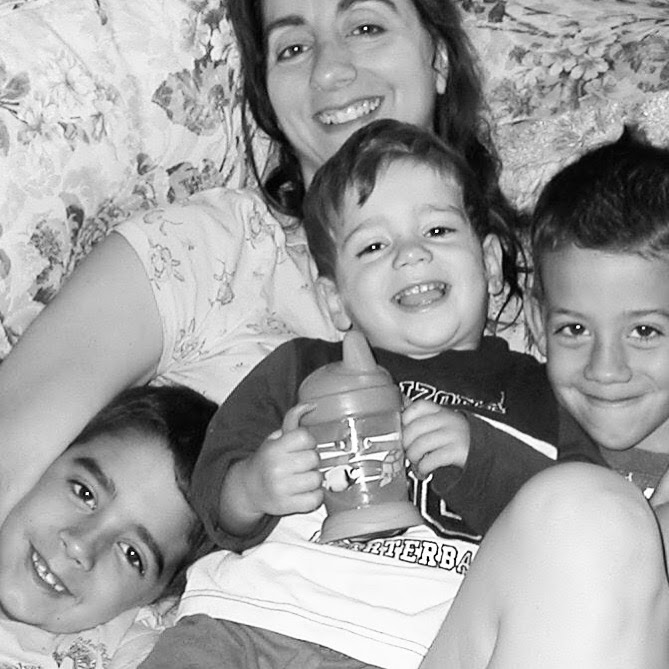 It was one of Marinette’s greatest joys to be able to be home with her 3 sons.

switch to. In 2010, I had a 3, 6, and an 8 year old and simply didn’t know what my next move would be. A chance meeting with Brian Nesline, an incredibly talented artist/graphic designer who is most known for the Faces of Buffalo projects, encouraged me to try to create art, have it printed onto products and sell them at shows and online. So, after months of pondering, I finally did it. Instead of designing corporate brochures and flyers, I started designing my own art to sell. I sold my first t-shirt, Buffalo Princess, to many area stores and was accepted into art shows. My cousin, Laura Schmitt, came along for my first show. She literally had to hold my hand through every step, I was so nervous because I didn’t know the first thing about selling. That small beginning started what is now Inspired Buffalo LLC where I am the designer and printer of my art, I assist other business owners with promotional products, and custom print special, meaningful gifts for customers. My business grew to the point where my 3 sons started attending traditional schools simply because my schedule changed to daytime and there wasn’t time left for schooling.

This life of having a career while staying home with my children definitely took a lot of twists and turns. Was it perfect? Not at all, just ask my husband and kids! 😂 We had to make a lot of sacrifices along the way. Do I regret leaving my 9-5? Not for a moment—well, maybe during the 6 week straight crying fest! 🤣 .

None of this was possible without God’s hand in it surrounding me with amazing support from my husband, family, and friends every step of the way. Without them beside me, I couldn’t have gotten where I am today while raising 3 boys. It was never a solo project, not even for one day.

Are you at a crossroads wondering if you should take the leap? Email me, I want to hear about it, really! Just make sure you have support. It’s a tough world out there and your team is how you’ll get to where you want to go. 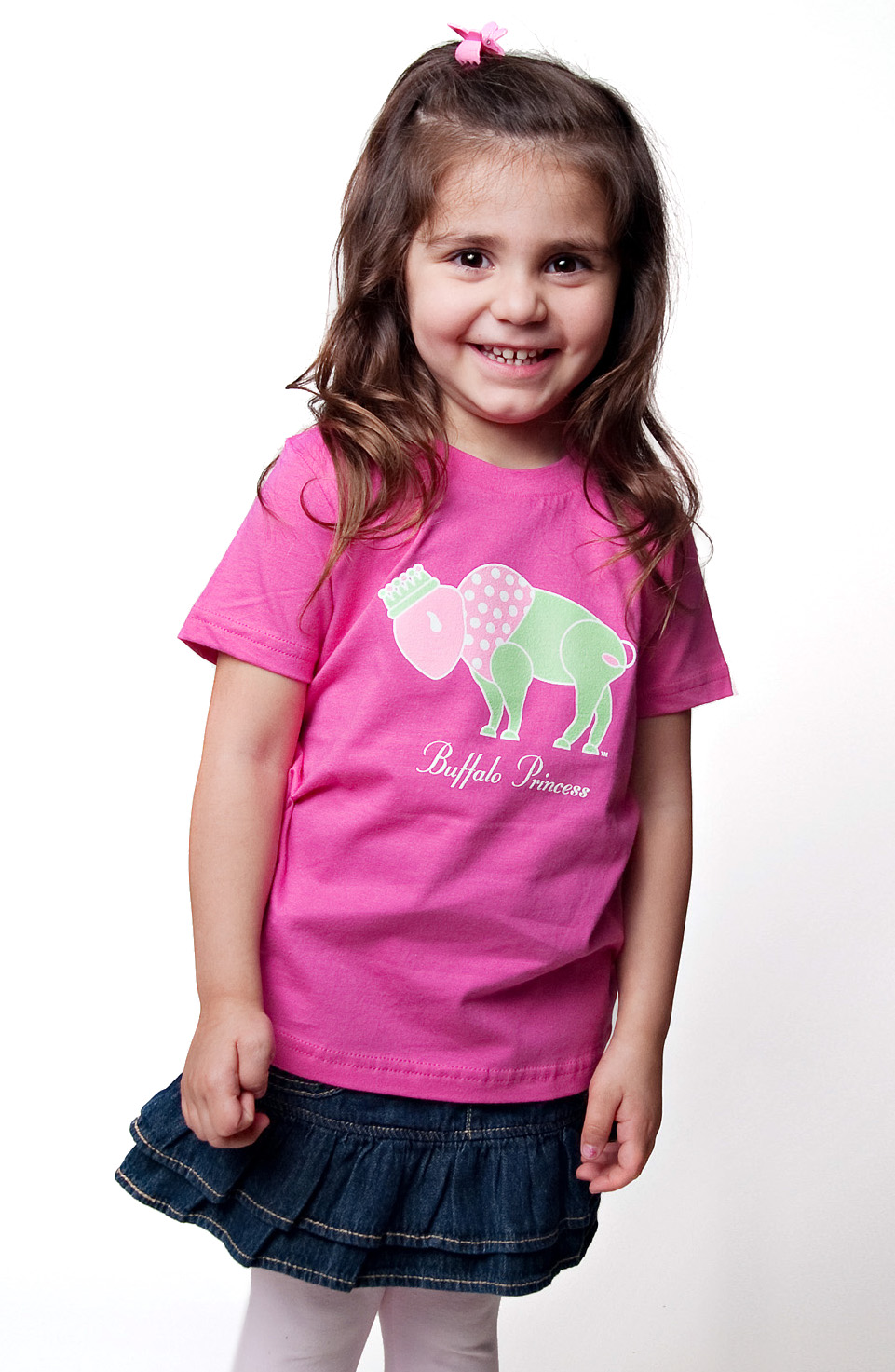 Marinette’s first t-shirt design was in 2010, Buffalo Princess, that was sold in stores around WNY and online.

As always, thanks for reading and supporting my small business. 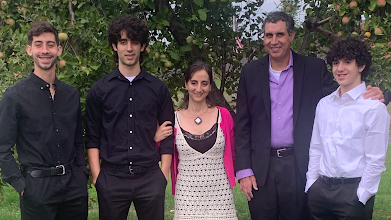 It’s The Stories That Move Me

Looking at WNY with New Lenses